About midnight, as Paul and Silas were praying and singing hymns of praise to God, and the (other) prisoners were listening to them, suddenly there was a great earthquake, so that the very foundations of the prison were shaken; and at once all the doors were opened and everyone’s shackles were unfastened.

When the jailer, startled out of his sleep, saw that the prison doors were open, he drew his sword and was on the point of killing himself, because he supposed that the prisoners had escaped.  But Paul shouted, “Do not harm yourself, for we are all here!”

Then (the jailer) called for lights and rushed in, and trembling and terrified he fell down before Paul and Silas.   And he brought them out (of the dungeon) and said, “Men, what is it necessary for me to do that I may be saved?”  And they answered, “Believe in the Lord Jesus Christ (give yourself up to Him, take yourself out of your own keeping and entrust yourself into his keeping) and you will be saved, (and this applies to both (you and your household as well. 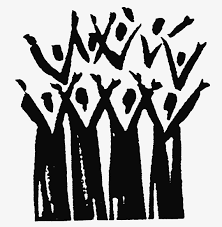 And they declared the Word of God (to him and to all who were in his house) .  And he took them the same hour of the night and bathed (them because of their bloody) wounds, and he was baptized immediately and all (the members of) his (Household).  Then he took them up into his house and set food before them; and he leaped much for joy and exulted with all his family that he believed in God (accepting and joyously welcoming what He had made known through Christ).  Acts 16: 25-34…the Amplified Version

Do you think there is a connection?  The Gospel of John tells us Jesus story of Lazarus resurrection from the dead.  And Jesus wept.  Why?  Because of the people’s unbelief.

Then in Paul’s writings, we are told to “Rejoice Always.”   Why?  It is the Christian’s way of life. We rejoice because of the resurrection.    We believe!   It happened!  He rose from the dead.  Christ’s resurrection is true.  And because He lives we live also.